Are Arts and Humanities Degrees Worthless?

Do not go $50,000 in debt and waste four years of your youth pursuing a degree that just isn't worth it. Take the time to buy and read "Worthless." It may prove to be a better investment than college itself.

The above, the premise of Aaron Clarey's book 'Worthless' got me thinking...

From personal experience I can't say that arts and humanities degees are entirely worthless. I did a joint BA in art and history, and some years later went back to get an MA in Crusader Studies, a rather niche area of medieval history. I have had two careers, as a historian and as an artist. I wrote a couple of books on the Knights Templar, but am now concentrating on a freelance illustration career, mostly with historical and fantasy themes. I daresay I am in quite a minority in having had some modest success in areas relating to degrees like the ones I did. These sort of courses are interesting, and good for the contacts you make while doing them, but in hindsight I see them as something of an indulgence. I don't know many other people on these courses who are still in related fields. (Someone from the Crusader course is now driving trains for a living, which in the scheme of things, is undoubtedly more useful and honourable as a thing to do, since people need to get to work more than they need to know about Zenghi of Aleppo's motives for attacking Edessa in 1144).

Although it was good and interesting to have contact and interaction with scholars in the field, in truth I daresay I could have learned everything I did during my historical studies from private study in libraries and online, and spent much less money in the process. So that is something to think about if you are considering doing a course like this.

Regarding art courses, I can't say that I learned much during my art degree that was of vital use as regards my present illustration work. It was a good time, though, and perhaps looks good on the CV, (and I grew as a person and learned a great many things unconnected to my coursework) but I'm not sure that I would recommend doing a general art degree rather than teaching yourself while avoiding costly tuition fees and  incurring student loan debts.

In general terms I would advise people to seek out courses that teach practical skills and knowledge. Avoid anything with a lot of critical theory or psychobabble. If you want to be a figurative artist/illustrator, seek out an institution that teaches technique, draftsmanship and composition. Seek out an institution that has churned out artists of the sort you want to be.

A degree should have a useful product. If the only thing you can do with the specialist knowledge is teach it to others then some might call the whole discipline essentially parasitic. Books that inform and interest the general public might be considered a product of the academic discipline of history. Thus the area of endeavour thus just escapes the stigma of being something without an end-product desirable or useful to society. As for art, the teaching should  be as practical and technical in nature as that which would be on offer on an engineering course. Artistic vision can't be taught, whereas no artist's work has ever suffered because the artist had an excess of technical ability to express their vision.

Posted by Gordon Napier at 16:25 2 comments: Links to this post

Here is 'Wolf Temple', provisionally finished. (Thanks to those on CA who had some advice re lighting etc.) 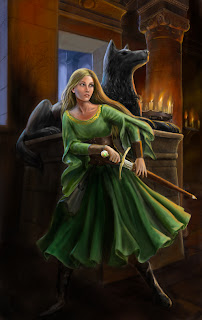 Posted by Gordon Napier at 11:22 No comments: Links to this post 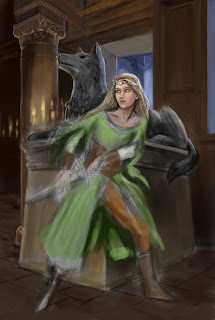 Something I'm working on...
Posted by Gordon Napier at 09:04 No comments: Links to this post 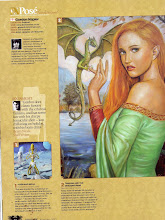